When I lived in Brighton, my flat mate and I decided to learn to jive. I can vividly remember walking into the church hall in Hanover and seeing our teachers, Janeka and Colin, dancing around the room. They were simply amazing and, like Bea, I instantly fell in love with jive. It’s basically the most fun exercise you can do and when I jive, I grin. It’s the best. Jive also involves lots of cool vintage clothes, making it the hobby that has everything. Lindy Hop is a member of the swing dance family and I wish I could do it. By making Bea and Ollie Lindy Hop, I was able to fulfil a little fantasy of mine. If you want to see what jive / swing / Lindy Hop looks like, check out this film (and keep watching until the end when the ‘maid’ kicks her partner on the bum; Bea would definitely do this to Ollie): 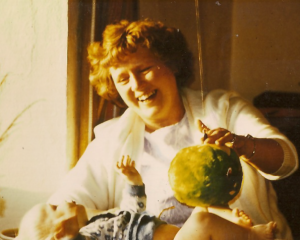 My own nan was the inspiration for Bea’s nan. She gave the best cuddles, threw legendary parties, taught me to play cards (for money) and believed all her grandchildren were beautiful geniuses. My nan never wore Top Shop clothes, but her nails were always perfectly manicured and her hands glittered with her colossal diamond rings. If anything, I had to tone down the fictitious Nan; the story of my nan’s hen night is hilarious, but I’m not sure my publishers would allow it in a book for teens!

My little sister, Julia, did some crazy stuff when we were growing up. Like Emma, she put a naked Barbie in my brother’s school bag which he then pulled out at school. Julia enjoyed colouring herself in with felt-tip pen and was pretty keen on being naked. Mum once brought her to watch my sports day; it was only when Jules started ‘fiddling with her tummy button’ (she liked doing this) that Mum, and my entire school, discovered she wasn’t wearing knickers. Julia is now 32 and she hasn’t changed much.

My two daughters also provided a lot of Emma inspiration. I keep a book where I write down all the funny things they say. Here are some of my favourites:

“What’s that smell? I can smell you.”

“I’m a naked shop keeper, but first I’m going for a wee.”

“Can I have some more allotment?” (omelette).

Like Bea, I suffered from the shyness. I have a spookily good memory so I can easily remember what it felt like to leave my real personality at home, and go to school as ‘quiet’ Jen. As a grown up, I seem to have swung alarmingly in the opposite direction and I now inhabit Betty territory. Once in year nine, I asked two girls in my class what book they were talking about (it was half-hidden in their bag like it was illegal). ‘It’s Forever by Judy Blume,’ said one of the girls, ‘but it’s too grown up for you.’ What?! We were the same age and I’d been reading my nan’s ‘romance’ books for years (and they were definitely too grown up for me). I didn’t say anything, but I wish I had. Memories like that inspired me to tell Bea’s story.

‘Though she be but little, she is fierce’

This is a simply superb quotation from William Shakespeare.  The line comes from Act 3, Scene 2 of ‘A Midsummer Night’s Dream’.  It’s a little complicated to explain the whole situation here, but basically, two human couples, who have been manipulated by fairy magic, are arguing in the woods at night.  This line is delivered by one of the women, Hermia, as an insult against the other, Helena.

It’s a great scene, but a little sexist.  I really wanted to use it in an alternative context, because, with a slightly different spin, it’s a really empowering sentiment!

How to Speak Arse

I first created the Romance language of Arse when on holiday in Paris. My mum and sister had been winding me up by speaking in Pig Latin. If you are unfamiliar with Pig Latin, it is an infuriating pretend language which is difficult to understand if you don’t know the rules. I didn’t know the rules and for some reason, my brain is not capable of learning them.

‘Your facearse is veryarse uglyarse,’ said my sister, quickly picking up the basics of Arse.

To speak Arse simple add the word ‘arse’ to the end of words. It’s up to you how many words end in ‘arse’. It’s very open-endedarse.